AfricaHackTrip brought so many new experiences and gave me an entirely different perspective of technology scene. Even though I only discovered a small part of the African world, I feel like sharing it with friends and fellows from the European tech community. In the last post, I summed up my thoughts about the environment and technology – now I’m adding a few more paragraphs. Enjoy!

Products
Africa undoubtedly needs technology as much as every other continent. It’s the easiest and cheapest way to solve society’s problems. Of course, it won’t abolish hunger, corruption, or the absence of electricity or water – but it is able to reduce their impact and offer at least short-term solutions. I was impressed by community and government awareness regarding the primary problems and their focus on solving them.

A majority of projects are directed at these social concerns and are supported by government organizations, European/American base foundations or NGOs. The other side of the story is there are not enough commercial products that would have a big influence on the economy and bring more independent national solutions.

Some of the most memorable projects:
M-Farm, BRCK, WebDesk, Green Foundation, African States, Light Up Nigeria

An additional but unmissable fact is: Africa loves PhP. And PhP loves Africa. The language speaks in every software product and this likely won’t change in the near future.

Devices
I’ve never encountered so many Windows-based computers in my life! It’s impossible to come across Apple devices, which is more than obviously due to cost. But a general absence of Linux or Ubuntu systems (which was built in Africa, with Africa in mind) is more than surprising. Computers are mostly second-hand, so it’s common to see broken screens or button-less keyboards. Systems infected with viruses and illegal software (btw Uganda doesn’t have any copyright laws established yet) are prevalent as well. Africa is the fastest-growing mobile market in the world, so phones are the main communication device there. The most visible firms were Huawei, Konka, Tecno and Nokia. The little kiosks or even individuals on the street selling ONLY air time or internet bundles are everywhere.* 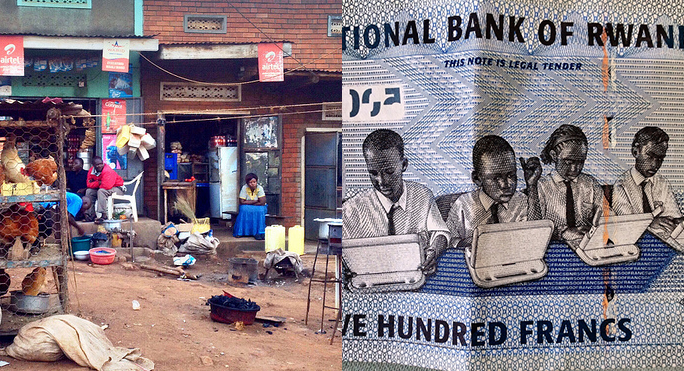 Design
Simply put, there is no design there yet. I met only a few professional designers, but many event attendees emphasized their interest in the particular field. Honestly, I didn’t see any great usability or graphic stuff being developed. To make it clear: I don’t mean American and Western European-based design, but design dedicated to the African user, focusing on their specific needs and esthetic. I’m sure it’s only a matter of time. As African technology is fresh, it is therefore focused on basic needs such as appropriate operation – if it works, it’s good enough :) However, entrepreneurs are aware of the power of design. What prevents them from more focus on usability and beauty in their products are: financial issues (that’s why developers there are often simultaneously designers) and a deficiency of experienced employees. Well, I see a big opportunity for this profession there!

As I said, these are my private impressions, based only on a crazy 35-day trip. Probably I didn’t notice everything and didn’t dig up all the information. That’s why I’m sure about one thing: I definitely want to go back to Africa and observe the real changes that should happen in subsequent years. Even if I don’t like or don’t agree with some of the local ideas or policies, I admire the way of living and the solutions that develop from it. The fact is, a place so diverse and full of contradictions attracts me and discourages me the same time. AfricaHackTrip allowed me to understand the continent better, so next time I won’t come there as silly or naive.

* popular tips:
Kenya – you can buy a Safaricom one-day bundle to use social media for only for 10KSH = 0.09 EUR!
Uganda – you can use Facebook Zero for free, everywhere, everytime…errr, sounds ominous but the topic of net neutrality won’t be discussed for now :/